Getting Started with Physics Bodies

Create and assign a physics body to enable physics.

There are three kinds of physics bodies:

SpriteKit provides a few standard shapes—those based on arbitrary paths and those generated from the alpha channel of a texture. The following figure shows the shapes available:

The following code shows how to generate the four physics bodies called out above:

A physics body is created by calling one of the SKPhysicsBody class methods. Each class method defines whether a volume-based or edge-based body is being created and what shape it has. As soon as a node has its physics body set and is added to a scene, it begins to participate in the physics simulation. The following code shows how to create a simple scene containing a shape node that is the curvy ground and a sprite node—the rocket ship. The shape node’s physics body is created from its path and the sprite node’s physics body is created from the texture automatically generated by SpriteKit when the node was initialized. Because the ground node has its isDynamic set to false, it is not affected by gravity and remains stationary.

After running for a few moments, the above code creates a scene that looks like the following illustration—the sprite node has come to rest in one of the valleys of the curvy ground line. 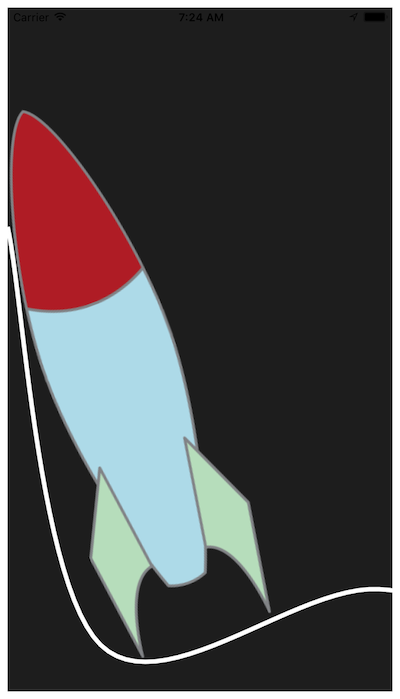