Understand how SpriteKit layers your scene’s nodes from top to bottom.

The standard behavior for scene rendering follows a simple pair of rules (as shown in Figure 1): 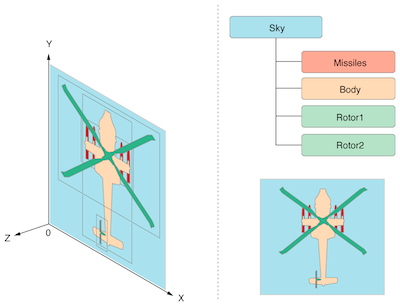 In the figure above, the helicopter body and its components are all children of the sky node. So the scene renders its content as follows:

When you take zPosition into account, here is how the node tree is rendered:

SpriteKit uses a deterministic rendering order based on the height nodes and their positions in the node tree. But, because the rendering order is so deterministic, SpriteKit may be unable to apply some rendering optimizations that it might otherwise apply. For example, it might be better if SpriteKit could gather all of the nodes that share the same texture and drawing mode and draw them with a single drawing pass. To enable these sorts of optimizations, you set the view’s ignoresSiblingOrder property to true.

When you ignore sibling order, SpriteKit uses the graphics hardware to render the nodes so that they appear sorted by zPosition. It sorts nodes into a drawing order that reduces the number of draw calls needed to render the scene. But with this optimized drawing order, you cannot predict the rendering order for nodes that share the same height. The rendering order may change each time a new frame is rendered. In many cases, the drawing order of these nodes is not important. For example, if the nodes are at the same height but do not overlap on screen, they can be drawn in any order.

Figure 2 shows an example of a tree that uses zPosition to determine the rendering order. In this example, the body of the helicopter is at a height of 100, and its children are rendered relative to its height. The two rotor nodes share the same height but do not overlap. 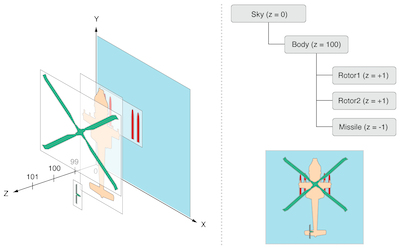 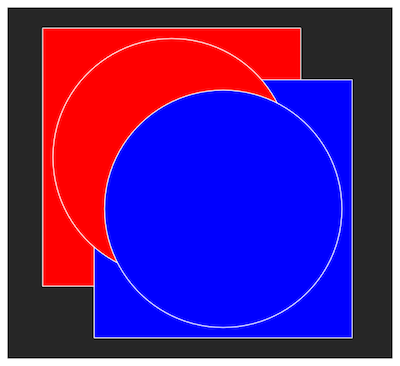 Because zPosition is additive across parent-child node relationships, you can use both tree order and zPositions to determine your scene’s rendering order. When rendering a complex scene, you should disable the sorting behavior and use the zPositions of nodes to create a deterministic scene order.

Important: The SKCropNode and SKEffectNode node classes alter the scene rendering behavior. The children of these nodes are rendered independently as a separate node tree, and the results are rendered into the tree that contains the crop or effect node. For more information, see Working with Other Node Types.