When a scene is presented via presentScene(_:), SpriteKit calls you every frame if you implement any of the functions shown in the following image: 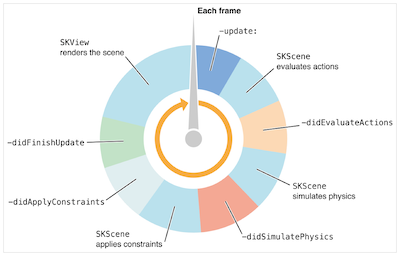 If you don’t implement any of the frame-cycle functions, SpriteKit will only render the scene when something within it has changed, improving energy efficiency and allowing your game or app to perform other operations instead.

Decide Which Events to Implement

Use a Scene Delegate Instead of Subclassing a Scene

A scene can process the actions on the scene tree in any order. For this reason, if you have tasks that you need to run each frame and you need precise control over when they run, you should use the didEvaluateActions() and didSimulatePhysics() methods to perform those tasks. Typically, you make changes during post-processing that require the final calculated positions of certain nodes in the tree. Your post-processing can take these positions and perform other useful work on the tree.